Become a Professional Actor for TV/Film

Online courses that teach your kid or teen everything they need to know to act for TV/Film. All courses taught by Emmy Award-Winning director, producer & actor Katie O’Grady.

Step-by-step practical training on the art & business of acting.
For ages 7-20 years. All levels of experience welcome.

Our Kids Have Been Featured On

Benefits of Our Acting Courses

Whether your child wants to become a professional working actor or just enjoys it as a hobby, nurturing their passion for acting positively impacts their real-life skills.

Putting oneself "out there" is vulnerable and frightening. Through acting & our supportive community, kids naturally build self-esteem and will be better prepared for presentations or any other real-life scenario where they're performing in front of a group.

No more feeling overwhelmed with how to get started or what next steps to take. With Katie's guidance, you will be learning from a seasoned actor who has walked this road and is still being cast for TV/Film roles today, and who has been empowering kids for over a decade to show up in their voice.


Learn to Act for TV/Film

Become a confident & professional actor ready to take on ANY audition, at anytime. This online program teaches kids & teens effective techniques for both the art & business of acting - from the basics all the way to getting booked!
download our free e-guide

There are SO many fears about getting your kiddo into the film and television industry.

As both a parent & someone with 20+ years in the TV/Film industry, I put together this guide with 5 tips that will help you keeping a watchful eye out for your kiddo, all while allowing your budding actor to blossom along the way.

Enter your name & email below and I'll send this straight to your inbox.
Thank you! Check your inbox. 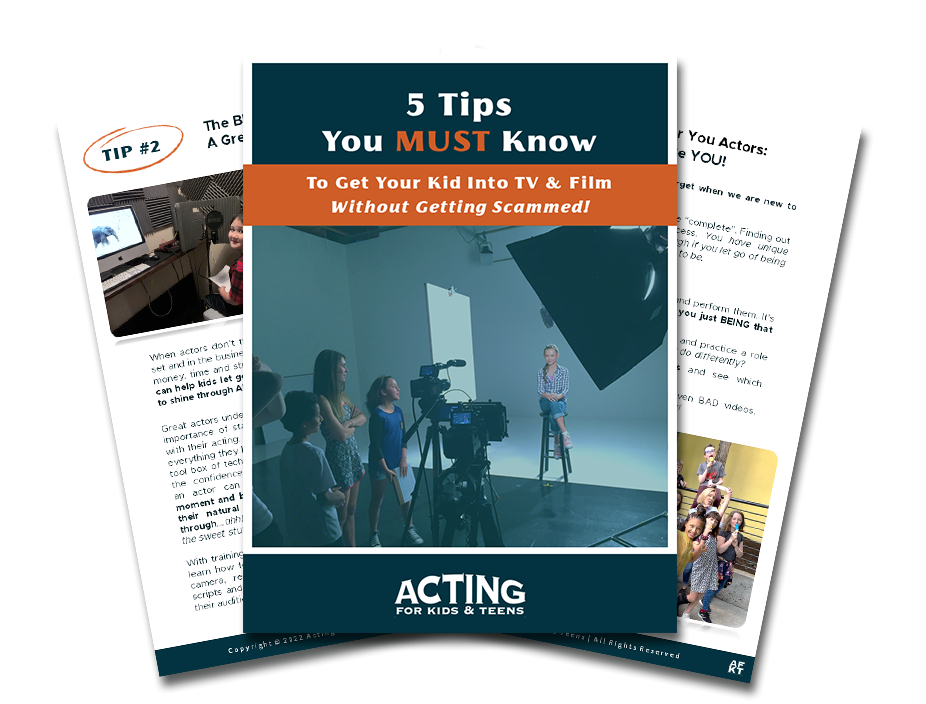 I know what it’s like to dream about being an actor but not know how to get there. I also understand how scary and uncertain it feels to take those first steps without fully knowing if you’re on the right path.

Working in the film industry for over 22 years as an actor, producer, writer and director on major network roles (Netflix, NBC, IFC, Showtime) has allowed me to see that the ones who succeed in this industry are the ones who never stop growing. They always ask themselves “What Next?”

Continuously training naturally keeps you on the right path, helps you reach your next milestone and will separate you from everyone else with a dream. I know it sounds simple, but it was true from being a little girl with a dream to training with top professionals in NY/LA/Portland to landing my first role in a Paramount Picture film to recently winning an Emmy…and it’s still true to this day.

As Founder of Acting for Kids & Teens school in Portland, I’ve successfully trained hundreds of actors and have watched them grow in confidence and land TV/Film roles. For the first time, we are going GLOBAL with this training so your child can develop those key skills to act for TV/Film, survive the business, and have more FUN!
Aim high, see big, judge widely

Write your awesome label here.
"We're so glad we found Acting for Kids and Teens. Katie  is not only an amazing teacher who just exudes joy and love for her students.  She is also a very skilled and successful actress.  Katie is eager to share her knowledge and talent with her students.  My daughter adores her and the rest of the AFKT staff. With their assistance, my daughter has been cast in several commercials and a TV show and even has her own IMDb page now!"
Tara H. (Mom)
“Thanks to Katie, my son is now a working actor. Her training and guidance has given him the skills needed to enter an audition room with confidence. He is getting call backs, booking jobs and loving every minute.“
Kristen S. (Mom)
"Katie helped our son love acting again. Her energy and ability to communicate with her students no matter their circumstances goes unmatched. Katie discovers the individual talents in each of her students and helps them celebrate their uniqueness. Our son grew emotionally and creatively under her direction. We are so very thankful for her dedication to her young budding artists!"
Tracey H. (Mom)

Acting for Kids & Teens is a state-of-the-art acting studio based in Portland, OR offering classes, workshops, voiceover lessons, audition assistance and private coaching. All of our coaches are working actors who empower kids every day to show up in their voice, while growing their confidence and life skills in a supportive community where they are heard.
Drag to resize

As both a parent & someone with 20+ years in the TV/Film industry, I put together this guide with 5 tips that will help you keeping a watchful eye out for your kiddo, all while allowing your budding actor to blossom along the way.
Enter your email below and we'll send you this guide straight to your inbox.
Sent! Check your inbox.
Created with